This is a simple but beatiful arrangement of the famous Jesu, Joy of Man’s Desiring – or Jesu bleibet meine Freude in German. Originally composed for orchestra and choir, it is not an easy task to make arrangement which is not too complicated for solo piano. However, we succeeded in that task. This is not a virtuosic concert arrangement for concert artists, such as Busoni’s. This is however perfect for amateur players, pupils and students.

Written mostly in two voices (the bass in the left and the violin melody in the right), it is written so that it is still possible to hear all the choir parts as well! The trick is to sustain a few notes here and there, which is all clearly shown in the score.

There are no reviews yet. 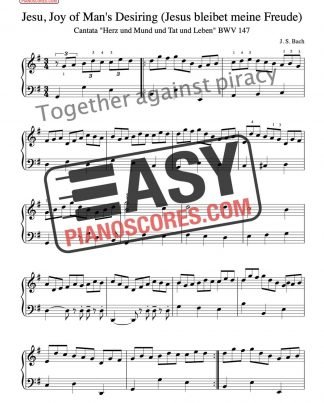